Motel owners see altruism and opportunity in sheltering the homeless 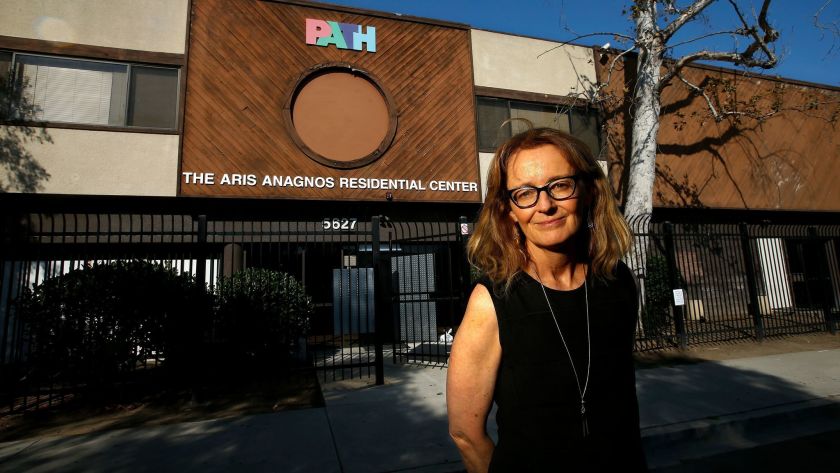 Empty motels like this one could potentially become homeless shelters. (Photo by Matt Rogers)

It’s a twist on the usual not-in-my-backyard story: A group in Hollywood is desperately trying to open a homeless shelter.

Until July 2016, outreach workers could steer people camping out in the area to a 65-bed shelter on Sunset Boulevard.

But the shelter’s operator, People Assisting the Homeless (PATH), closed it with plans to convert the building into permanent housing for homeless people.

Now a committee of business owners, church leaders, social services providers and real estate interests has formed with the goal of establishing a replacement.

At the group’s first meeting in May, hosted by the Hollywood Property Owners Alliance, no one could think of where a new shelter might go.

“That is the big challenge, finding the space,” said Kerry Morrison, executive director of the alliance.

Their frustration illustrates a roadblock for ambitious plans funded by the Measure H sales tax to quickly open hundreds of new shelter beds as more permanent housing is being built. Temporary shelters are not necessarily easier to build than permanent housing.

Money is not the primary obstacle now that the Los Angeles County Board of Supervisors has committed $209 million from Measure H to strengthen and improve the shelter system.

In August, the Los Angeles Homeless Services Authority called for bids on $6.3 million to fund about 350 new shelter beds. Another offering for 200 women’s beds is scheduled for October. Even if shelter operators produce all those new beds, the authority would still be falling behind its target of 825 new beds by June. And it’s far from certain that enough bids will come in.

Before applying for the funds, providers must secure a suitable building. Officials are unsure how quickly that can happen.

“We believe there aren’t a lot of places currently existing that can add new beds,” said Chris Callandrillo, director of programs for the homeless authority. “There’s not a lot of capacity. We believe people are going to have to go and find new sites.”

‘There is a void’

It took networking, luck and time for First to Serve Outreach Ministries to secure a 175-bed facility that opened in January in South Los Angeles.

“We knew there needed to be some shelter beds in our community,” said the Rev. Richard Reed, executive director of the ministries. “There is a void.”

Reed, an experienced operator of winter shelters and transitional homes, had tough specifications. He needed a building that would be large enough to house close to 200 adults with space for a dining facility, offices and a public area.

Plying the church circuit, he found a suitable building on a commercial stretch of West Vernon Avenue. It had once been housing for parolees, Reed said. The former owner’s plan to convert it into a commercial prison was killed by community opposition.

Then an investor bought it intending to demolish it and build apartments.

“We talked,” Reed said. “I think he would have made more money if he went that direction. But we convinced him, you know, that there’s really a big need in the community.”

The freshly painted two-story building now is a bright spot on a dreary commercial stretch. It has dormitory-style rooms with four to eight residents per room, separate wings for men and women, a courtyard, a meeting room, and offices for on-site staff. Residents come and go on their own schedules, many to work or school.

A long way to go

The challenge for officials working on the homelessness problem is replicating First to Serve’s success five times over. That’s what it will take to meet the county’s goal of creating 1,075 beds in the next year — 250 to be funded by the county Department of Health Services in addition to the 825 funded by the homeless authority.

Many ideas have been proposed for converting unused space into shelters. Vacant hospitals and warehouses are frequently mentioned as candidates. Most have flaws, among them remote location, environmental contamination and structural decay.

In the months since its first meeting, the Hollywood group has identified two potential sites. Both would require costly rehabilitation to create sleeping areas, bathrooms and kitchen facilities.

Morrison is trying to line up private funding for a shelter in unused space at the Dream Center, a faith-based facility occupying the former Queen of Angels Hospital site in Echo Park. She’s hoping the city will fund the work at the other site, in a city-owned building.

She’s also working on a backup plan: reopening the PATH shelter. It will take PATH up to 18 months to get its new permanent housing project ready for construction. Morrison said she is negotiating with the agency to allow her group to use it in the meantime.

That would allow time to find and rehab another location. More important, it would restore a resource that will be in even more demand when new outreach teams that are being funded by Measure H hit the streets of Hollywood this year.

“It seems unacceptable to me that we have this robust outreach effort and we have zero place to put people,” Morrison said. “This is a huge priority.”

But it’s a race. To put in a proposal for Measure H operating funds, the group has only until Sept. 15 to gain control of a building and have a plan to begin operations within 60 days. It may be too late already.

For potential to expand shelter capacity, nothing in Los Angeles County compares to the Salvation Army’s homeless services facility in the city of Bell.

The 25-acre property — a remnant of the Cheli air base, where aircraft parts were stored during World War II — contains 10 warehouse bays of 40,000 square feet each in an office park district east of the Los Angeles River.

The Salvation Army already operates one of the county’s largest homeless programs there. There are shelter beds for 450 in a variety of programs, cottages for transitional housing and a garden where residents have paid employment growing their own food.

Dormitories built in two of the warehouses are divided by shoulder-high walls into semi-private cubicles with one or two beds each.

Amenities include a gym, a library, an auditorium, a kitchen equipped by a gift from Wolfgang Puck, an expansive dining hall and offices for dozens of program providers.

In June, the Salvation Army broke ground on 64 units of permanent supportive housing on the property.

And there’s still plenty of space to grow.

Strolling through one of the 10 warehouse bays, Lt. Col. Kyle Smith, head of the Salvation Army’s Southern California division, said it could accommodate 1,000 people.

“We could put in thousands of beds, to be honest,” Smith said. “But we’d have to make sure we had the right infrastructure — meaning toilets, showers — and able to provide food, that would be key, and make sure we have the right permits and everything was up to code.”

But for now, thousands of beds remains an illusion.

Even assuming Bell would approve the expansion, the cost of refurbishing a building for that many residents could be $10 million, shelter director Steve Lytle estimated — all the funds set aside from Measure H money for shelter construction.

Instead, Lytle is planning for incremental growth. He already has his hands full preparing 125 new beds for veterans being forced to leave the Veterans Affairs center in Westwood.

He’s adding 45 additional beds for clients of the county Department of Mental Health. Another program is expanding by 50 beds.