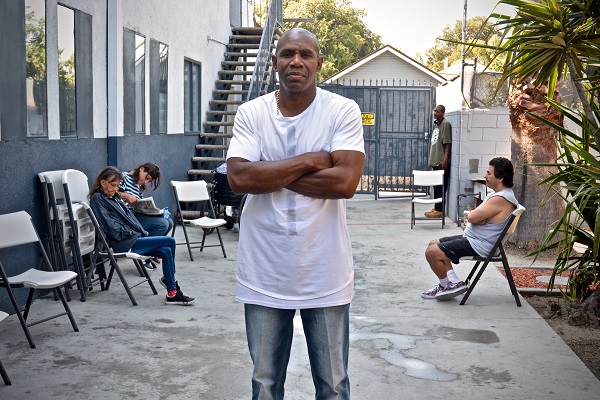 The devastation of drug and alcohol addiction is all too real in the communities of South Los Angeles. Many lack the resources necessary to overcome these diseases. In these communities, Black and Brown addicts are often overlooked and casted away unsympathetically.

But the national attitude toward drug addiction is entirely different.

America is again seeing an epidemic of drug addiction, particularly heroin. The surge is so great that for the first time in generations, mortality among young White adults has risen.

Even Republican lawmakers shun the tough-on-drugs speeches, even opening up about personal struggles within their own families.

In 2003 Rev. Reed stepped into a void that existed in South Los Angeles.

“I want to be a vessel for services to the underserved communities of Los Angeles. I’m reacting to the needs of the community,” says Rev. Reed.

“I can relate to many of my clients because I was an addict for about 15 years. Once I got my act together, I felt the need to help others who struggle with addiction.”

It was a transforming experience of the spirit.

He realizes getting sober is hard and making sobriety last is much harder. Most people who enter into a residential rehab treatment program manage to detox and stay that way during their weeks or months-long stay. But problems begin when they leave. It is common for many patients to walk out the door from rehab and quickly fall back into their addiction.

However, Reed has ambition that appears to mesh with his contagious sense of humor.

Rev. Cager, is also the First To Serve Board president and has known Rev. Reed for almost 20 years.

“He can connect to people in the FTS programs because he relates to people, especially his clients,” recounts Rev. Cager. “Every client in First To Serve has a best friend and his name is Rick Reed.”

The goal of Rev. Reed and First To Serve, is to get people to the point where they no longer need his services, but that’s very far away at first.

The lack of resources for the people when they are at their most vulnerable may sometimes make no sense.

Rev. Rick Reed (R) of First To Serve celebrates with a woman transitioning into her own apartment. (courtesy photo)

She recounts numerous times Reed has shown up to the police station after midnight, in bedroom slippers, pajamas and a trench coat, to pick up a client.

“It’s just about the people. I admire him and his mission,” said Buchanan.

She describes FTS as grassroots and not corporate.

Reed’s observers say he has dedicated his life to the program and refuses to be out-worked by someone else.

Reed reflected on his dedication to the organization.

“I was funding this project out of pocket.” I was so committed to the success of this project, I was never sure where the money would come from.”

However the extreme demands took a toll on Reed and created personal challenges.

“It cost me my marriage.” Reed recounts.

Rick is divorced because he had another woman. Rev. Cager says, “that woman is FTS. He has dedicated his life to this program.”

In 2003, his mentor, Rev. Cecil L. Murray inspired Rev. Reed. The name “First To Serve” originates from a mural inside FAME church. His program would be modeled after the church’s community outreach programs.

According to Rev. Reed, “we could be the first to serve clients with substance abuse problems.”

In 2004, Reed submitted a proposal to the Los Angeles Homeless Services Authority (LAHSA) for transitional housing because he needed more resources. LAHSA’s assistance would provide the needed funding for FTS programming needs.

FTS has 13 locations throughout Los Angeles.

Reed’s programs meet the needs of individuals that include three core components: detox, therapy and aftercare.

His next vision for FTS is a certified training program that is contiguous with institutions of higher learning.

According to Pat Parker, director of operations. they seek to educate Masters of Social Work (MSW) degree students and give them field experience. “In turn they would have access to our clients and more importantly, advocate for change in public policy.”

She says First To Serve is “a ministry.”She adds, within the “bowl of homelessness are unemployed, underemployment, depression, domestic violence, substance abuse and trauma.”

“Rick is an expert in serving the homeless. A wonderful voice and advocate for the homeless and he understands the population of South L.A.”