Natalie Purnell looks at a picture of her daughter inside her room at a former motel being used to house homeless women and children. She landed a shared room in the Figueroa Street building a year ago.(Francine Orr / Los Angeles Times)

As Los Angeles politicians face mounting pressure to combat the homelessness crisis, the City Council is weighing two measures aimed at clearing obstacles to getting more people into housing.

But the proposed laws have stirred up concerns among critics who fear they will muzzle neighbors or concentrate homeless housing into specific neighborhoods.

One measure would allow permanent supportive housing projects to avoid a review process that can drag out a year or more and expose the projects to public battles with opponents.

The proposed law would slash parking requirements and allow homeless housing projects of up to 120 units in much of the city — and as large as 200 in downtown and some other areas — to avoid environmental review and public hearings as long as the projects meet certain requirements. Under current law, housing projects with 50 units or more have to go through a more exhaustive process.

Housing advocates say the measure would give a crucial boost to the city’s goal of building 10,000 new units for homeless residents in a decade, by easing the approval process and encouraging the construction of bigger buildings.

Council members are also considering a measure that could make it easier to temporarily convert motels into homeless housing, which has been touted as a more immediate way to get people off the streets. City officials hope that by removing zoning restrictions, they will encourage struggling motels to contract with county-funded programs to get people housed. 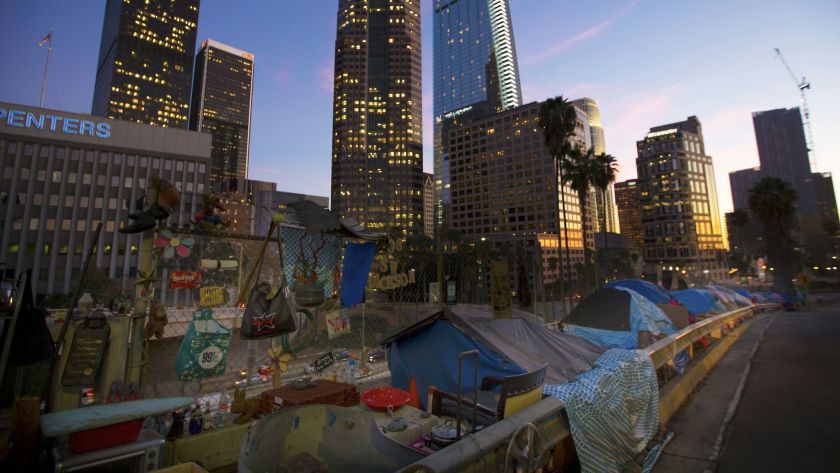 Both measures are being vetted by a City Council committee Tuesday. As tents pop up from San Pedro to Winnetka, politicians face growing impatience from Angelenos who approved a $1.2-billion bond for homeless housing construction, as well as a countywide tax for homeless services.

“A lot of people have asked, and rightly so, why isn’t homelessness gone — I voted for those new measures,” Mayor Eric Garcetti said before the annual homeless count last month, pledging to “double the pace” of building affordable housing in the city.

But if Garcetti is worried about backlash from voters who see little change on L.A. streets, he also faces critics who believe the city is going too far, depriving residents of a chance to voice their concerns about housing projects.

Reams of letters have been sent to city planners over the proposed rules to ease the way for permanent supportive housing, many of them from Venice residents alarmed about homeless housing being considered for city sites.

Christian Wrede, a founding member of the community group Venice Vision, called it an “anti-democratic measure” that would allow powerful politicians and developers to disenfranchise working families and get around the requirements of the California Environmental Quality Act.

Wrede said Venice residents are willing to help house the homeless, but “it’s just not right for us to have all these protections stripped away.”

Planning officials helped craft the proposed laws to carry out a citywide plan to address homelessness, which calls for L.A. to relax some of its rules to facilitate housing construction for homeless people.

Between 2008 and 2016, fewer than 2,400 permanent supportive housing units were built in Los Angeles. Nearly two-thirds of those projects had to undergo city vetting that can extend the process, according to a city report.

In August, lawmakers sided with opponents of a Boyle Heights project that would house dozens of mentally ill homeless people after the owners of a neighboring shopping center challenged its environmental clearance.

Eliminating parking to save money

Many builders have tried to avoid delays by making their housing projects small enough to avoid a process called site plan review, which requires an environmental review and can also trigger a public hearing. Tommy Newman, public affairs director for the United Way of Greater Los Angeles, estimated that process can delay construction as much as a year and a half.

Under one of the proposed laws, builders could steer clear of that process if they meet certain standards for how homeless housing is designed, constructed and operated.

All of the units must be affordable. At least half must be provided to homeless tenants. They must be located in zones where dwellings with multiple units are allowed — and generally must be in designated areas where public transit is frequent or readily accessed. And they cannot eliminate more units than they create.

The city would also allow such homeless housing projects to be built higher or denser than otherwise allowed. And some zoning rules would be loosened. For instance, developers would not need to build parking spots for apartments set aside for homeless tenants, who are less likely to own cars.

“Every parking space costs between $20,000 to $40,000,” said Ann Sewill, vice president of health and housing for the California Community Foundation, a major funder of the bond to pay for homeless housing. “If we get rid of 100 spaces, that saves us millions of dollars.”

Attorney Jamie T. Hall, who represents Venice Vision and another group concerned about the ordinance, complained that the new law would impose a “one-size-fits-all approach” on communities with different needs. Parking, for instance, might still be needed for formerly homeless tenants in some areas, he argued.

“That is really poor planning,” he said. “You need customization of projects to meet the needs of particular communities.”

The City Council would still have leverage over housing projects because developers would need a letter of acknowledgment from the local council member before getting funds from the housing department. And homeless housing projects could still face additional review at City Hall if they sit in the coastal zone or other designated areas with their own requirements, city planners point out. 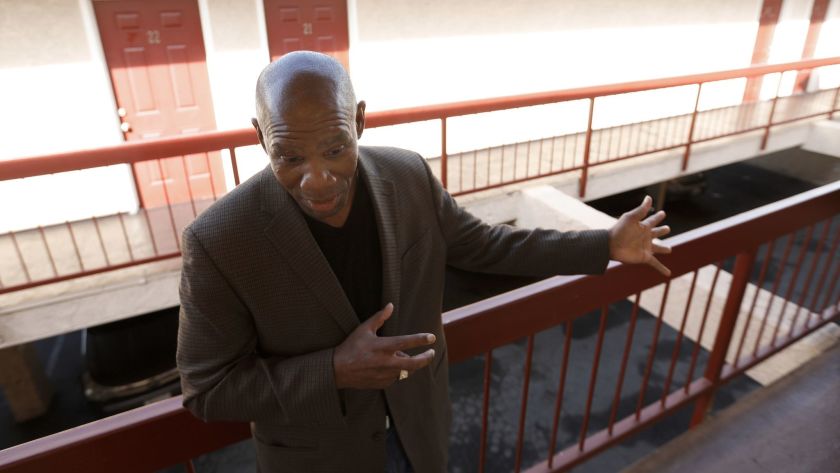 Other barriers would remain

Even if the law passes, many other barriers, such as high costs for land and labor, would remain for groups trying to build homeless housing, said Laura Lake, co-president of the nonprofit Coalition for Veterans’ Land, which is trying to develop permanent supportive housing for female homeless veterans and their children.

“All of these regulatory changes don’t change those facts,” Lake said. “Those are the true barriers.”

Housing developers can also run into obstacles when they want to turn aging motels into homes, city officials say.

Trying to change how a building is used can spur the city to check whether it is in line with current zoning rules, which may have changed since the building was constructed. That, in turn, could require the building to undergo a lengthy process to change the rules.

Under one of the proposed ordinances, motels that are being temporarily converted into homeless housing would not have to be brought into line with the current zoning rules.

It would also allow the buildings to avoid any zoning problems if they are turned back into motels in the future. And the proposed law also allows refrigerators and other cooking facilities to be installed in guest rooms, which is now barred for buildings built after 1963.

To participate, motel owners have to agree to lease out their building for homeless tenants. City officials say the proposed rules are aimed at making it easier for motels to partner with nonprofits that are tapping an existing pool of county funds for rent subsidies.

As long as a contract is in place, former motels could continue to provide housing for homeless people, whether for shorter or longer stays.

So far, the proposed ordinance has not stirred up the same debate as the other law, but some residents in areas with clusters of motels, such as Sylmar, have raised concerns that their neighborhoods could end up with a disproportionate amount of homeless housing.

Natalie Purnell sits in her room at a former motel in South L.A. that is temporarily being used to house homeless women, run by the nonprofit First to Serve.(Francine Orr / Los Angeles Times )

It is unclear how many motels may be converted if the proposed rules are approved. There are nearly 400 motels with more than 10,000 guest rooms across the city, according to a city analysis of assessor data.

At one meeting in South Los Angeles, more than 100 people showed up to learn about motel conversions, city officials said.

Motel owners are sometimes reluctant to sell the buildings that have been their livelihoods, but leasing them to a nonprofit allows them to hold on to the property and get regular income, said Joe Patel, a motel owner and former president of the Apartment Assn. of Greater Los Angeles.

Even better, he said, “there are so many happy souls.”

A few years ago, Patel made an agreement with the nonprofit First to Serve to lease one of his buildings in South Los Angeles.

The onetime motel on Figueroa Street houses dozens of formerly homeless women and children, who sleep in simple rooms furnished with dressers and televisions and eat dinners of chicken enchiladas and chili downstairs.

The program, which includes case managers and other staff on site, is funded by the Los Angeles County Department of Mental Health, said the Rev. Richard Reed, the executive director of First to Serve. Women stay for a few weeks or a few years, paying nothing for their rooms.

The goal is to help them save enough money to move in somewhere else, said Christina Verjan, program manager at the site.

Natalie Purnell said she was “out and about,” bouncing between family and motels, before she landed a shared room at Patel’s former motel a year ago.

“I’ve had my share of shelters and transitional living,” she said. “This is a palace compared to the other ones.”